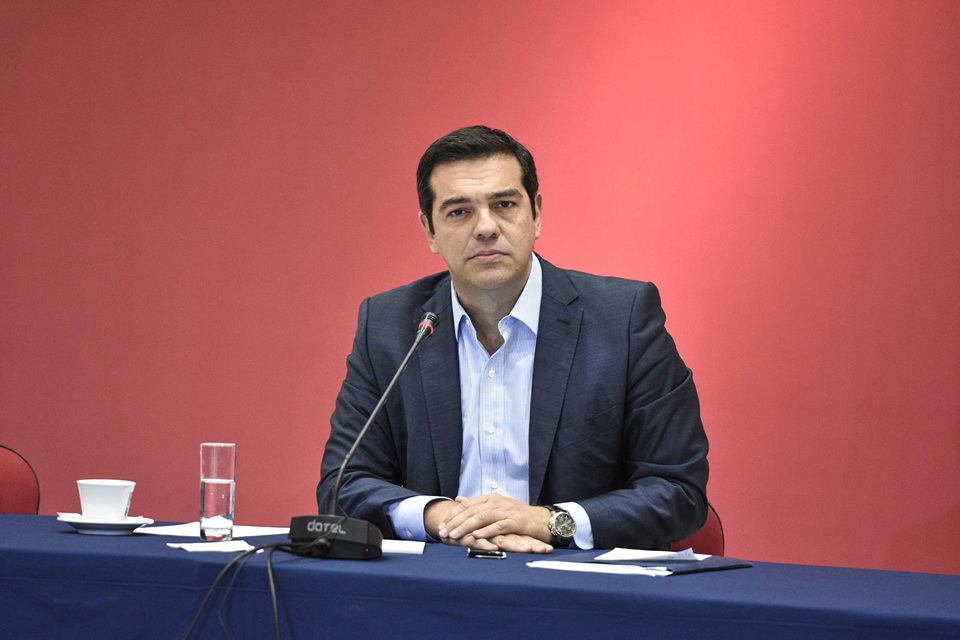 During the pre-election period, Alexis Tsipras and SYRIZA rhetoric claimed for the development of a ‘parallel’ government programme that would run simultaneously with the implementation of the bailout agreement.

For the time being, what they meant by this concept remains unclear, although those voters who did pay attention surely considered it as a way of resisting to the MoU demands, led by a neo-Left government that keeps its social compassion intact.

There is another -supplementary- way to read that: It could (should) be a set of strategies that will mark the turning point for Greece, move the country away from diachronic distortions and problems. Ten of those are mentioned below:

1) PUBLIC SECTOR: Alexis Tsipras needs to demonstrate political will to modernise the state apparatus, deal with vested interests and unions and most importantly allow criteria of professionalism to penetrate the state’s walls.

Despite a general disbelief, Greek public servants (especially young people) are willing to work in more efficient ways, adopting modern techniques in management and operations and exploring their creativity. They only ask for necessary tools and guarantees of equal treatment, workplace justice and meritocracy.

Surely, a ‘Left government’ has more chances to reform the state, attacking from within the ideological rigidities of hardcore public servant unionists.

2) STATE MANAGEMENT: Government (the new cabinet and those that will follow in the next 20-month period) needs modern management, digital tools and transparency guaranteed by automated processes. It wouldn’t be a hyperbole to argue that the most important doing of former PM George Papandreou during his period of government was Diavgeia (‘clarity’), namely the online (accessed by all) platform that records public spending (appointments too) by all ministers and state agencies and organisations; since 2010, it remains journalists’ favorite read. Greece needs more of those.

Digitisation and management are the key parametres that could put things in order. Perhaps in the first anti-corruption era, it would be quite acceptable to allow systems to protect the public good, instead of people who have lived for too long exposed to corruption and wealth discovered in political corridors (even if they are not corrupted themselves).

3) STRATEGY: Ministers (even the news ones) should not really play a role – with the exception of some key cabinet members involved in negotiations and the monitoring of the bailout agreement. Tsipras (who, rumour has it, is quite correctly, looking for a new HQ) should organise a West Wing – type of structure, summoning ministers to discuss strategy in their assigned fields.

Ministers should not be allowed to build their own feudals and run favours with voters and SYRIZA sympathisers. This model is obsolete, whereas limited state resources as well as the watchdog function of the writable web have secured its failure.

Digitisation and modern management techniques could really make a difference for cabinet members usually driven by clientelistic and patronage relationships. Digital platforms could revolutionize the way ministers are monitored, laws are implemented and policies are applied.

4) NATIONAL NARRATIVE: A strong narrative for the future. The first point of relief from the MoU-3 is already spinned through the government programmatic statements. To achieve this 20-month timeline, Tsipras government will have to go through hell during the implementation phase.

Government needs to go much further and adopt a rhetoric that will draw its arguments from thematically networked and integrated local success stories throughout the country, which centre their triumph on the human factor.

Until recently, the story was about Greeks fighting evil Europeans (esp. Germans) who wanted to destroy and then loot the country. Then in the last elections, Tsipras narrated the battle of the new versus the old. After his latest victory, a new story needs to emerge to accompany Greeks through the new wave of austerity that will run in parallel with the healing process, towards recovery.

But again, perhaps Greeks do not need a common-for-all vision to subscribe to in order to move forward. Little, but powerful grassroots stories with the proper visionary elements could change people’s mindset, mobilise their creativity and their ability to overcome impasses based on their personal strengths and resourcefulness. Motivating people and inviting them to follow through in the national effort would be the human-centric way of handling MoU politics; it would also be the politicians’ first step towards redemption.

5) ENTREPRENEURSHIP: Tsipras’ version of the Left (that has already distanced himself from the traditional notion of Greek leftish ideology) has a unique opportunity to promote entrepreneurship with a human face. Thinking in modern terms, Development Ministry should gather the best employers around the country that have excelled in terms of the working environment and employee practices employed and create a Greek Company Well Being Index (based on human resources and other criteria, such as genuine corporate social responsibility towards local community that hosts the investment as well as within, at the workplace).

Privatisations that would carry a socially forward message (not obsolete stuff old leftist unions always asked for) could really change the face of the Greek industry and give a positive message across Europe as well.

6) PROTECTIONISM. Protectionism, i.e. lack of competition is the key problem of the local market, since corporations always preferred to eye Greek state procurement rather than competitive markets. Political affiliations made profits easier and corporate sustainability weaker.

From pharmacists to taxi drivers, even tertiary education local professionals (academics included), all have operated for too long, in a protected environment. Professionals in Greece were always considered as having more value than their clients; the superiority syndrome ruled most of the fields.

Internet has liberalised people’s access to information and has revealed various types of inadequacies: in science, quality and pricing of products as well as marketing. A certain degree of competition already introduced in some professional fields has produced spectacular benefits for Greek consumers.

7) COMPETITIVE ADVANTAGES: A lot has been said as regards this subject, mostly as regards tourism; from old apothegms that rely on the country’s natural beauties, to new strategies that value the contemporary customer experience approach. Surely, certain modern investments on key islands and the mainland have explored luxury and well-being investment concepts with great success, primarily aiming at up scale tourist incomes.

Other areas that include more added value to the country need to be considered too, such as technological innovation (to stop the brain drain or even invite some indigenous neo-migrants to return), education for international audiences, new agriculture (lots of experiences there, for tourists too), clean energy, specialised health services, especially in combination with the country’s natural resources.

8) COMMUNICATION: Tsipras has worked hard to build his present dominance in Greek politics. What’s more, he has a natural talent for human communication. Young people are attracted to him, perhaps because they think he can identify with them, using language they can understand. On the other hand, in his early 40s, Alexis is never seen with a tablet in his hands, whereas some shots of him taken in front of a laptop seem fake enough to alienate the Millennials. Recent photographs of the Prime Minister occupying the co-pilot’s seat in an old C-130 aircraft may motivate military personnel, but could be easily misread amongst the youth. Social media reactions blurred PM’s heroics quite easily.

Tsipras needs to spend the time and foster the willingness to go digital and communicate more over modern online platforms; in terms of image as well as essence. For instance, Barack Obama and David Cameron when tweeting they put their initials giving a more personal tone to the flow of tweets commonly handled by their staffers.

9) MILLENNIALS: Young people would really support any measure towards transparency and against corruption, since they are coming at age in an era in which clientelism is de facto in its decline (due to lack of money and perhaps the first effects of primary systems such as Diavgeia), and old politicians are being pushed towards retirement. Millennials are building their own networks through social media – rather than through political parties. Half call themselves political independents, the highest share of any generation.

Millennials have some unique characteristics most of contemporary politicians would find hard to understand. They believe in autonomy (thus they are difficult voters) and reward, they are imaginative and require the attention of others. They value achievement, they like informality and a real meaning in life. They are also pro-transparency (anti-corruption), and they believe in fairness and political correctness.

10) What about NEW ETHOS in politics? Well, this is a tough one. However, the economic crisis that is in its sixth year still represents an opportunity to redefine the way we do things in this country.

Traditionally, clientelism and favouritism have been two major problems of Greek politics. The crisis seems to have removed these means of politicking from politicians. Digital transparency also has played a role. Nowadays, expenses are monitored more closely. Entrepreneurs are summoned by prosecutors and some of them are detained pending trial. Nowadays, bribes in state procurement are rare or do not exist at all. This is not solely attributed to the new government; it is the result of a combination of factors, one of which is the dynamic comeback of the justice system.

Also, perhaps 300 MPs that spend around 20 million per year are too many for a small country of 10 million people. The role of the Greek MP should be revisited too. More participation and awareness as regards their role should be established, along with new rules regarding transparency and accumulation of wealth.

Moreover, various state agencies attached to -and financed by- the ministries should find additional ways to secure revenues; for instance utilizing ESPA funds. This way they could also justify their existence and boost their scientific independence.

This is not by any means an exhaustive list. Other and more detailed parametres can be associated with Greece’s escape from its difficult past. What is mentioned here, however, seem to be the most urgent ones in terms of essence as well as politics.

By moving towards reforms, Tsipras could gain the trust of the political centre, thus securing his dominance in the Centre-Left. By saving the country from its diachronic troubles, he would meet with more modest citizens, who subscribe to the ideology of ‘getting things done’…

Mumbling our way out of the Greek crisis